Kaliningrad State University
Center for the Study of Russia in Europe 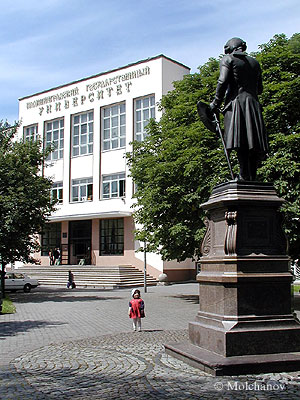 Contacts for the Kaliningrad CASE

When discussing the current problems of the Kaliningrad city and the Kaliningrad Region (KR), we most often proceed from empirical observations, pure fact or, at best, political interpretation and processing of fact. Even worse, the KR issue has been used for PR campaigns. Meanwhile, it belongs in the realm of historiosophy or, at least, geopolitics. The issue should be looked at from a longer-term historic prospective , not just ten years from now.

We are currently facing a certain comprehension problem which is vital for the future of the nation. It is related to the emerging opportunity of bringing Russia back into Europe, of integrating in European economy and politics, without compromising our own interests (incidentally, Russia has long been integrated into European culture). In this sense, the Kaliningrad enclave happens to be a very illustrative and lucky example. The "God of the area" (a Cultural Philosophy concept) seems to favor this particular spot in the Baltic region.

It is often mentioned that the social and cultural aspects of KR development are very special because of the migrant nature of its current population, geographic isolation from the rest of Russia, and close proximity to countries that belong to Western civilization. Here there are complex issues as well as opportunities to accumulate unique experience of resolving both current and future problems based on mutually beneficial international cooperation in the area. Another concern is that the clash of civilizations at the new Eastern border of European Union may intensify, and that the Kaliningrad region, surrounded by o countries, may become the focal point of conflict. There is another scenario reflecting a different type of general feeling: civilizations will tend to merge, and the KR will turn into a zone of cooperation between Russia and EU, setting an example for other border regions on both sides. Which of the two scenarios prevails is vital for the future of Europe.

In fact, the Kaliningrad situation is quite typical. Historian Vasily Klyuchevsky noted that Russia's history was a history of colonization of unoccupied areas, like the United States Russia always had its frontier. To be sure, those new areas were not always exactly "unoccupied", in some cases they were inhabited by indigenous peoples and were vacant only in the eyes of Russian settlers. The Kaliningrad population consists entirely of migrants, a social group that has always been the most dynamic. The problem is, the area had been inhabited by Germans who are normally viewed as representatives of a more advanced (material) culture. This naturally produces certain psychological complexes. Whether Russia dares to be part of Europe seems a logical question. Where does it comes from? I believe this question is a legacy of the isolationist policy of ancient Russia (before Peter the Great), with its deadly fear of any Western influence, but it also grows out of more recent experience of living behind the iron curtain in a totalitarian state, where any attempts to implant the European values of freedom and independence amounted to criminal offence.

The only reasonable alternative to catastrophic solution of international issues by our country, a choice that will lead to a world-wide disaster, is the ideology of Russian Europeism. This kind of ideology makes it possible to take a critical look both at Russia and Western Europe, for both parts of Europe are dear to the Russian European who thus has every reason to long for improvement on either side. But this type of critical approach is essentially different from the one taken by "Russian patriots" when they talk about the West, and is equally far from Western chauvinists' attitude towards Russia (with an urge to crash the enemy). What we mean is a sort of self-criticism that will hopefully take shape within European culture, the potential outcome being the possibility to lead normal life throughout the European world. The dream of a Russian poet, to live in Europe without leaving Russia, will then come true.